Paris is a charming European capital and an ideal romantic getaway for every lovebird. This popular tourist destination has rich culture and history. But it’s not all about history and architecture when it comes to the City of Love.

There are a lot of other things and quirky secrets that even Parisians do not know about the French capital. Here’s an awesome list of 13 Paris facts that you probably didn’t know.

1. The Eiffel Tower Should Not Be There

One of the most iconic buildings in Europe, the Eiffel Tower, was intended to be just another temporary monument in Paris. The goal was to demonstrate the superior construction and technological skills of French architects. It was not always popular. What’s more, the Eiffel Tower was pretty unpopular when it was built in 1889.

Many residents, especially seniors, protested against this structure. They regarded it as a worthless monstrosity. A lot of painters, writers, and architects also complained about the Eiffel Tower. They called it a ridiculous giant tower that dominates the French capital like a huge black smokestack. The Eiffel Tower has withstood the test of time in spite of many protests and it’s now one of the timeless icons of the city.

2. There Is an Underground Lake Under Opera Garnier

Believe it or not, there’s a huge water tank beneath Opera Garnier (Opéra de Paris). You might be wondering how the lake formed in the center of the city. The construction of this magnificent building started in 1862. It was designed by Charles Garnier. He faced a big problem though – the foundations of the Opéra de Paris have been built on the wetland soil. That put the entire structure at risk of collapse.

To avoid this scenario, Charles created a concrete liner full of water with the goal of blocking infiltrations. That’s how this forbidden lake has formed. It’s now used for the training by the fire brigade divers. Please note that the lake is not accessible to the public.

3. Restaurants Are Extremely Expensive – The Priciest In the World

Planning to visit Parisian restaurants with your loved one? Start to save for this costly affair because it costs a fortune to try the best local wines and food. Paris is home to world-class restaurants and top-of-the-line cuisine.

That said, it comes as no surprise that it’s one of the costliest cities in the world when it comes to fine dining. If you are a gourmet ready to splurge on high-class restaurants, you should go on a private food tour with a gastronomy expert. It’s worth the money!

Even though Paris is a highly-populated capital, there is no stop sign in the entire city. While this sounds odd, car accidents don’t happen frequently on the city’s roads in spite of dense traffic. You may wonder how. Thanks to the right-of-way rule. This means that the right gets priority throughout the city.

The only stop sign was placed in the sixteenth arrondissement. It was replaced by a no left turn sign a few years ago. Although there are a lot of traffic lights in Paris drive in the City of Lights is a daunting challenge for most car drivers, even the local ones.

5. Notre-Dame the Most Visited Monument in France

Many people think that the Eiffel Tower (also referred to as Iron Lady) is the most visited Parisian monument. Well, they are wrong. It’s ranked 4th by travelers. According to some estimates, about seven million people visit it per year.

The Notre-Dame cathedral ranks first with over 12 million visitors annually. It is followed by the Louvre Museum and the Basilica of the Sacred Heart of Paris (Sacré-Coeur Basilica).

6. The Louvre Is the Most Popular Museum In the World

Maybe you assume that the Louvre is popular with tourists, but you probably didn’t know that it’s the world’s most popular museum. This should not come as a surprise since most tourists are eager to see the Mona Lisa while in Paris. The Musée du Louvre welcomes roughly 9 million guests each year.

If you want to skip the line, you need to join a guided Louvre private tour. This is the best way to explore this majestic museum that hosts more than 450,000 artworks. It will allow you to see the highlights of the museum, including the Portrait of Lisa Gherardini. Don’t expect to see all the paintings because it would take you several weeks.

7. It Is Home to Ghostly Metro Stations

Counting nearly 400 stations, the metro network of Paris keeps many secrets. Some of the metro stations are ghostly and a bit spooky. While some of these stations are abandoned, others are never used or no longer in use. As such, they are perfect shooting places.

The Porte des Lilas, for example, is an abandoned station that occasionally serves as a film set. Most of the unused or abandoned metro stations are used as garages for the maintenance and storage of the city underground trains.

Perhaps you have heard of guillotines in Paris. Don’t expect to encounter one while wandering around the city. However, you can still find a spot where an old guillotine was installed. The infamous guillotine has been concreted here for public executions. It was placed at the corner of Rue de la Croix-Faubin and Roquette street at the site of a former prison.

The imagination of Parisians is constantly fed with different strange stories about their city. Did you know that there is an underground world of Catacombs in Paris? It’s one of the main sources of fantasy for both residents and visitors.

This mysterious world houses a large ossuary consisting of numerous underground tunnels and eerie catacombs, most of which are inaccessible to the general public. Tourists can still explore a great part of this underground world by joining a guided Paris Catacombs Tour.

10. It Is One of the Greenest Cities in Europe

As a matter of fact, Paris is the ‘greenest’ city in France. It is estimated that there are about 500,000 trees in this green city. Henry IV of France is considered to be the most responsible person for making Paris a green European city. In the 16th century, he ordered the creation of numerous tree lines in the city. Today, there are a lot of tree-lined streets, parks, and green walkways (promenades) in Paris.

11. You Can Find Here the Biggest Sundial In the World

If you stroll through the Place de la Concorde, you will come across the 23-meter-high Obelisk. This tall structure is one of the most impressive visual marvels in Paris. You can take a photo of it during the private Paris walking tour.

Located in this beautiful square, the Obelisk functions as a sundial in sync with surrounding Roman numerals. Many residents ignore or don’t know that it is Egypt’s gift to Paris.

Chances are you’ve seen or heard of Love-locks Bridge in Paris. Maybe you didn’t know that the city ended the long tradition of attaching padlocks on Pont des Arts a few years ago by removing love locks from this famous bridge.

It was one of the most popular tourist attractions (especially among lovebirds) in the French capital. While tourists can no longer attach padlocks to the bridge, they still have plenty of atmospheric options and spots.

Rungis Market is the principal Parisian market that houses around two million tons of horticultural products, fish, vegetables, and cheese each year. Covering about 6 square miles, it is the world’s biggest wholesale food market. This large complex is situated in the southern suburbs within the Rungis commune. So if you stroll through this area, be sure to visit Rungis Market.

You should also visit other food markets and shops in Paris. We recommend visiting chocolatiers and food shops in Montmartre. This is a great chance to try the best French specialties and food, including pastries, cheeses, wines, chocolates, and cured meat. Don’t miss it!

Paris is undoubtedly the most atmospheric city in the world. Full of beautiful places and historical attractions, “the City of Light” (“la Ville Lumière”) provides you a mysterious and exciting experience. There are 13 things you didn’t know as yet, such as:

So now, you are absolutely ready to explore Paris! Make the trip you always wanted and let Paris amaze you… we are definitely sure about that. Top 3 Things to Do in Nice 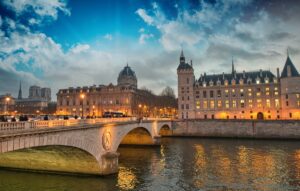 10 Places to Visit in Paris